A mystical bow carved from the twisted remains of the Great Olm.
Loading... 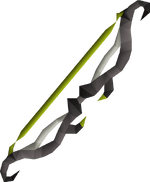 The twisted bow is a reward from the Chambers of Xeric that requires a Ranged level of 75 to wield. It can fire any type of arrow, including dragon arrows. The twisted bow is extremely valuable due to its unmatched power against monsters with a high magic level, such as Commander Zilyana.

Similar to Crystal bow, the bow has an attack range of 10 tiles. As all attacks have a maximum of 10 range, long range does not provide any benefit, but may be used to gain Defence XP.

Unlike other bows that have a set strength, the twisted bow functions differently: the higher the target's Magic level is, the higher the bow's accuracy and damage.

The accuracy modifier is

The damage modifier is

Therefore, the maximum hit with the twisted bow outside of the Chambers of Xeric is 89 with Dragon arrows and 99 Ranged, when using all damage boosting items and effects (Ranging potion, Rigour, Necklace of anguish, and imbued Slayer helmet).

The twisted bow is commonly used against bosses and strong monsters that use highly accurate and powerful magic attacks, such as Commander Zilyana, Brutal black dragons, Chaos Elemental, or the mages and Jads in Inferno and Fight Caves. In addition, some bosses have exceptionally high magic levels despite not using it as a combat style, such as Giant Mole, being very effective against them as well.

However, against monsters that have a lower magic level, the twisted bow's damage and accuracy outputs are mediocre, typically performing worse than Toxic blowpipe. This also applies to other players in PvP situations.