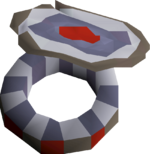 The tyrannical ring is a ring dropped by Callisto south of the Demonic Ruins.

It is often used with Dragon warhammer for its special attack, as it only reduces the enemy's defence if the player hits, which is where the tyrannical ring's accuracy bonus helps.

It can be imbued into a Tyrannical ring (i) using 650,000 Nightmare Zone reward points, giving it a +8 crush attack and defence bonus, instead of the usual +4.