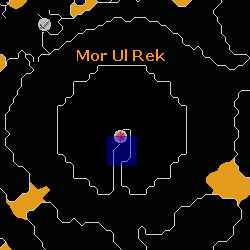 TzHaar-Ket-Keh is an NPC located in the center of Mor Ul Rek. You can speak to it to start the Inferno minigame.

Players may exchange their infernal capes with it for a chance of obtaining a pet Jal-nib-rek.

Retrieved from "https://oldschoolrunescape.fandom.com/wiki/TzHaar-Ket-Keh?oldid=8210014"
Community content is available under CC-BY-SA unless otherwise noted.