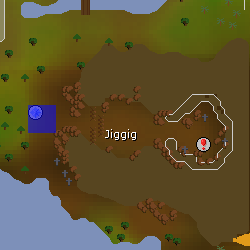 Uglug Nar is an ogre shaman who wanders around outside Jiggig along with several other ogres, including Grish, who starts the quest Zogre Flesh Eaters.

Uglug Nar is the solution to the hard anagram clue: GULAG RUN. He will ask you to complete a puzzle box.

Retrieved from "https://oldschoolrunescape.fandom.com/wiki/Uglug_Nar?oldid=9050524"
Community content is available under CC-BY-SA unless otherwise noted.