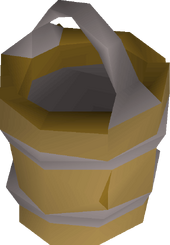 Ultracompost is a more potent version of supercompost and is used in conjunction with the Farming skill. Ultra Compost reduces the chance of a players crops becoming diseased whilst growing, as well as increasing the minimum number of crops that will be received by the player upon harvest, even if those crops are protected. Minimum number of herbs goes from five to six.

Retrieved from "https://oldschoolrunescape.fandom.com/wiki/Ultracompost?oldid=4727321"
Community content is available under CC-BY-SA unless otherwise noted.