He believes he's the greatest smith on Gielinor. 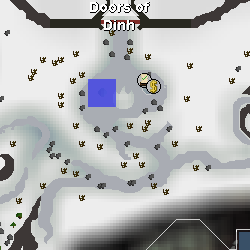 He is a master smith, and stays at the camp to maintain the Doors.