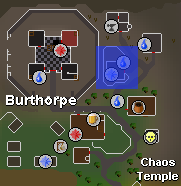 Unferth is the hypochondriac human pet of Bob the Jagex Cat. He is the starting point for the 'A Tail of Two Cats' quest, in which he asks the player to find his missing pet cat, Bob.

The Apothecary states that Unferth is a hypochondriac, and gets fed up every time he comes to him seeking a cure for his "illness".

After the events of Dragon Slayer II, Unferth is distraught over Bob's death. The player gives him positive reinforcement to make him feel better.

Retrieved from "https://oldschoolrunescape.fandom.com/wiki/Unferth?oldid=9049664"
Community content is available under CC-BY-SA unless otherwise noted.