Arrange your bank in the layout of your dreams, and have it stay that way, with bank placeholders!

Organising your bank just got easier. Bank placeholders allow you reserve bank slots for specific items, giving you the ability to create a fixed layout for your bank. Never again will you find yourself scrolling endlessly to find an item - with the help of bank placeholders you can know where everything in your bank is at all times!

To create a placeholder, right-click an item in your bank and click the 'Placeholder' option. This will withdraw the items in the bank slot leaving a placeholder in their place. 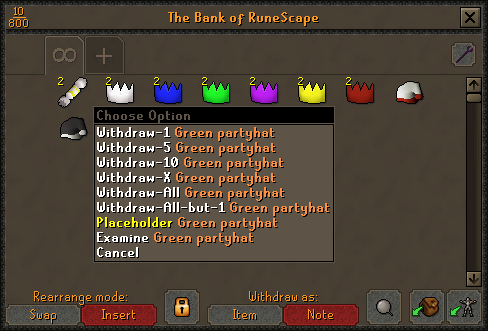 Alternatively, you can enable the 'Always set placeholders' option, found at the bottom of the bank screen, to set a placeholder every time you withdraw every item in a bank slot.

If you want to get rid of a placeholder you can right-click it and select the 'Release' option.

Alternatively, if you would like to get rid of all of your placeholders at once, you can use the 'Release all placeholders' button found in your bank settings. 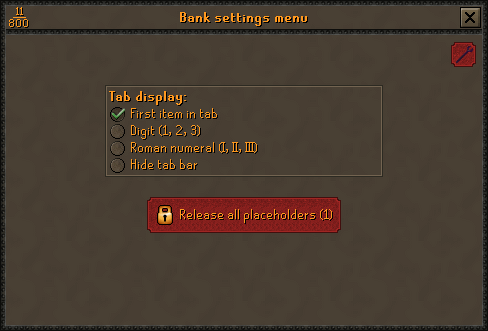 For the initial launch, we've done this for a wide variety of kit that has multiple forms, e.g. partially degraded Barrows items, teleportation jewellery, charged/uncharged versions of weapons, etc.

We've also done it for potions, so that you could withdraw a 3-dose potion, leaving a placeholder, drink a couple of doses, then return your 1-dose potion to the placeholder slot. This may not actually suit all players, though, so we've written the shared placeholder system in a way that lets us tweak individual items after launch, so when you've had a chance to try the system, you can let us know how you'd like it changed.

If you had spent a long time getting placeholder copies of Nightmare Zone imbues or Void equipment, you can now return these items to get most of your reward points or commendation points back. For Nightmare Zone imbues, the pre-existing 'Uncharge' option now returns most of your points, and for Void kit there's a dodgy squire by the bank who'll take it off your hands. We're not giving 100% refunds, since players shouldn't be able to switch back and forth between rewards depending on what they need at the time.

It is already possible to sell your graceful and prospector kit back for 80% of the cost. We'd be happy to add similar refund options for Barbarian Assault, Gricoller's Tithe Farm and other similar features in future, so don't discard your spare copies straight away if you no longer need them.

Previously, the game engine would give every player logged into a world a random level of priority every game tick. This made the processing of player's actions entirely random and completely unpredictable. While the system being unpredictable can, in some instances, be an advantage, this also caused a lot of inconsistencies in combat (most noticeably player-vs-player combat). 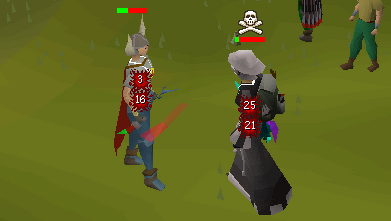 In order to make combat and many other aspects of the game more consistent, instead of randomising the priority each player is given every game tick, priority is now only randomised once every 100 - 150 game ticks (60 - 90 seconds). Within the duel arena, the relative priority of players who are fighting each other will not change throughout the duration of a duel.

The biggest benefit to this change is that it gives players in PvP more consistent combat, allowing them to play according to their priority.

A shortcut has been added to the fence found on the eastern side of Rellekka. This shortcut requires 57 Agility to use and is a great way to save some time.

Wearing ice gloves when at the Blast Furnace will now allow you to pick up bars without cooling them first. This should be a nice, small advantage for you heroes out there!

This Friday we will be releasing a developer blog describing changes we will be making to Deadman mode based on the feedback we have received from the community. This blog will discuss changes we want to make this season, as well as many that we would like to make for next season.

Also coming this Friday, at 5pm BST we will be hosting a reddit AMA in the /r/IAmA subreddit. Be sure to come along and ask us any questions you have for any member of the team. We'll be answering as many questions as we possibly can. We look forward to seeing you there!

Retrieved from "https://oldschoolrunescape.fandom.com/wiki/Update:Bank_Placeholders_%26_PID?oldid=1622851"
Community content is available under CC-BY-SA unless otherwise noted.