This week in Old School we've got platinum tokens, boss room counters and lots more! Let's take a look at the details.

Platinum tokens are a stackable, tradeable item which are worth 1,000 coins each. Using a stack of coins greater than 1,000 in size on a bank booth, bank chest or banker will exchange as many of the coins as possible for platinum tokens. 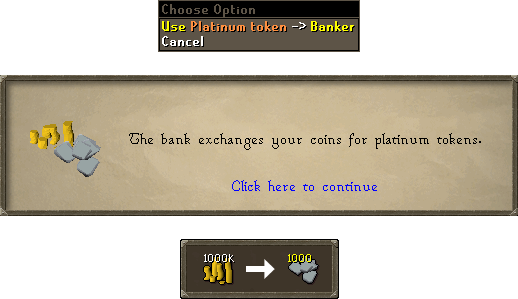 While they are a great way to store large quantities of coins, platinum tokens cannot be used on the Grand Exchange or in shops.

We've added a 'peek' option to the entrances for the following bosses:

Right-clicking the entrance to each of the above bosses and selecting 'peek' will let you know how many players are currently in the room. This will help you find an empty world without having to take damage in the process.

Applications for the competitive Old School tournament are open until July 3rd. Don't miss out on a share of a $10,000 prize pool and an opportunity to become a part of RuneScape history! Apply today.

The Old School Team
Retrieved from "https://oldschoolrunescape.fandom.com/wiki/Update:Boss_Room_Counters_%26_Platinum_Tokens?oldid=308864"
Community content is available under CC-BY-SA unless otherwise noted.