This week we're focusing on bugfixes with several quality of life changes to make your time on Old School a little more pleasant, including the ability to combine abyssal tentacle charges.

A tentacle has 10,000 charges by default; this update lets you combine two to get up to 20,000 charges in the combined tentacle. It is not possible to combine abyssal tentacles if the total charges will exceed 20,000. 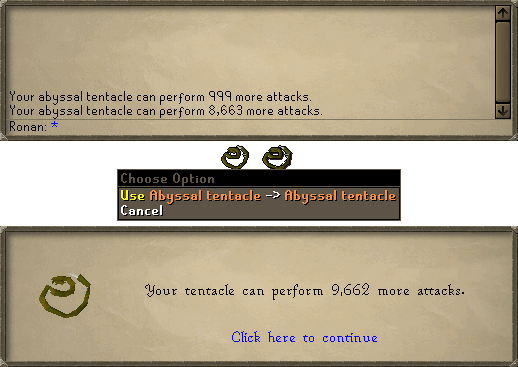 A shortcut has been added to the north side of the lava maze found in the wilderness. It requires 82 Agility to use.

Sherlock no longer requires you to use a clue scroll on him in order to get a challenge scroll. You can now simply talk to Sherlock with your clue scroll in your inventory.

When stood inside guarded zones, it is no longer possible to attack other players. This change will prevent players accidentally attacking other players in guarded areas and will help prevent issues with suicide accounts.

Please note: players who are stood outside of a guarded zones are still able to attack you if you are within range of their attacks, whether or not you are stood in a guarded zone.

Retrieved from "https://oldschoolrunescape.fandom.com/wiki/Update:Bugfixes_%26_Combining_Tentacles?oldid=1537111"
Community content is available under CC-BY-SA unless otherwise noted.