The Chambers of Xeric
Rally your comrades, muster your courage and take on the greatest challenge in Old School! 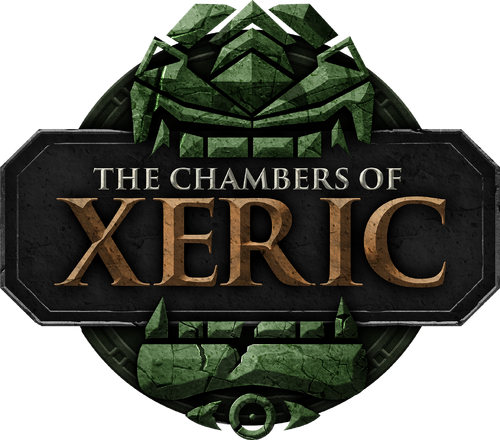 Xeric's Might
Rally your comrades, muster your courage and take on the greatest challenge in Old School!

Contained within the Chambers of Xeric are his mightiest commanders, fallen from grace. Among others, you'll face disgraced generals, master artisans, and a megalomaniac former high priest. These bosses will put your skills to the test, and prove a challenge for even the most experienced PvMers. 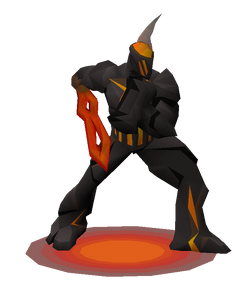 Your performance in battle will earn you points towards your end rewards with both individual score & team score mattering. Every combatant must pull their weight for the greater good. Beware though, deaths will deduct from your individual score, so exercise caution in the Chambers.

You'll need more than fighting talent to best the labyrinth though, with skill challenges, chances to restore your supplies, and even some devilish crabs to deal with. You'll need multiple skills at your disposal to fully utilise the Chambers environments to survive, including mixing potions & gathering food.

These items will be tradeable between team mates, so don't worry if you're the novice chef of your friends, as you can rely on them for food. In fact, to promote teamwork & helping others out, providing supplies for use in combat will actually earn you points towards rewards at the end of the dungeon. Points are awarded when the items are used, not made, so make sure you and your allies make use of everything available to you. 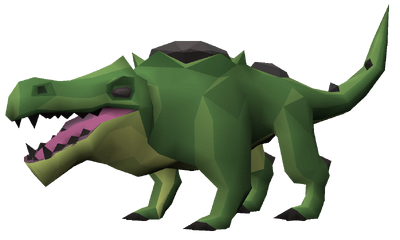 In the deepest level of the Chambers waits the Great Olm, Xeric's greatest adversary. This fearsome encounter stands between you and reaping the rewards of your efforts. You'll need your wits about you and preferably some dependable allies to reap the rewards that lay beyond.

In addition to brand new weapons & armour, there'll be a chance for those lore fiends among you to learn where such abominations came from. Each boss will drop a unique tome, explaining their origins & motives. Additionally, to learn more about the tragic story of Xeric & the history of Kourend, you may now visit the historical archives, via Arceuus Library. 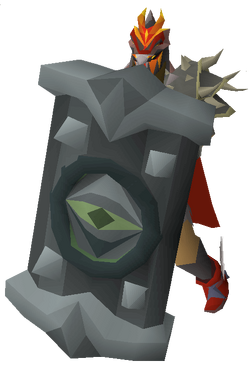 With up to 100 members in a party supported, you can take on the Chambers with all your allies, but the scaling means that you'll face a fierce fight whether there are 5 of you, or 50. 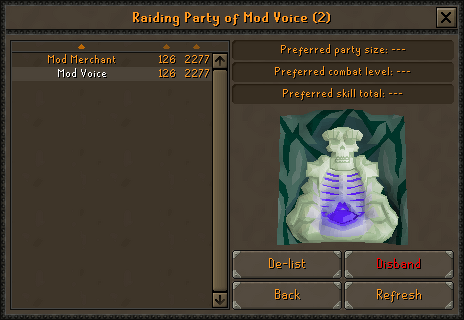 You can use the recruitment board to form your own party, advertise it to others and manage its members. The board will also list parties that other players are hosting, so you can see their members and join the team.

In order to make finding allies a little easier, we've implemented a Raiding Party Finder. To use this, use the message board near the entrance on the top of Mount Quidamortem. You can see it on your minimap indicated via the brown party finder icon on your minimap. 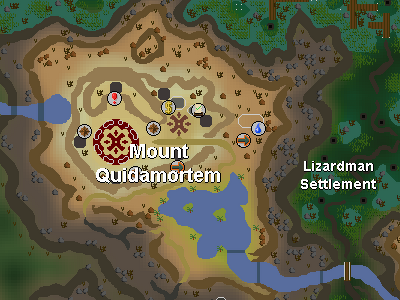 Lovakengj House has set up a minecart track up to Mount Quidamortem to service the expedition there. If you collect a control scroll off Miriam, near the Lovakengj bank, and deliver it to Stuliette on the mountain, you’ll be able to travel there much more conveniently on future trips.

Rewards
To the victors, the spoils.

Speaking of Rewards however, if you'd like to remind yourself of the full list, check out the drop down below for a complete list. There is the return of the iconic Dragon Claws, as well as all new weapons & armour including the brand new two-handed shield, Dinh's Bulwark. 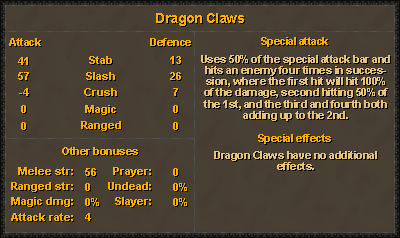 To achieve this, they trade off some of the Defensive stats of Ahrim's for additional Magic Attack Bonus, as well as 2% Magic Damage increase per piece worn.

The non-degradeable nature of the Robes will provide a Magic alternative to the Bandos and Armadyl armours.

The Twisted Bow is a slow, hard-hitting and accurate longbow which requires level 75 Range to use. The bow changes in strength and accuracy when used against magical opponents. Arrows all the way up to and including dragon arrows can be fired by this weapon. 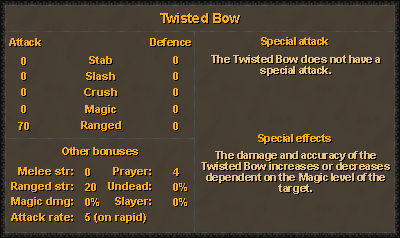 While the Twisted Bow has strong base stats, it can become stronger or weaker against opponents depending on their magic level or magic attack bonus.

The following graph shows the buff % at different magic levels:

As an example of the Twisted Bow's strength, Dagannoth Prime is one monster where this bow is likely to be useful. The boss has a Magic level of 255, which would provide a Ranged strength buff of 217% and a Ranged accuracy buff of 142%.

While the Twisted Bow will be strong against some monsters, it will also be very weak against others. If a monster or player has a Magic level and bonus of 1, the bow only provides 54% of its base damage and 40% of its base accuracy.

The Twisted Buckler is a shield requiring level 75 Range and Defence. It provides best-in-slot range accuracy bonus, as well as noteworthy defensive stats. 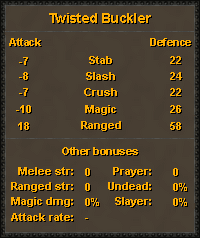 The Twisted Buckler is the the spiritual successor of the Odium Ward, providing similar uses and value at a higher level.

Dinh's Bulwark is a two-handed shield which requires level 75 Defence and Attack to equip. The bulwark is unlike any other shield or weapon currently in game, and offers some interesting advantages to its users. 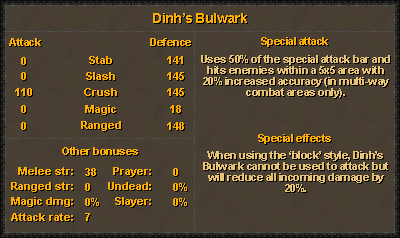 Dinh's Bulwark has two attack options: block and pummel. Unlike attack styles on other weapons, these options change the nature of the shield in a big way.

When using block, you are unable to attack. However, all incoming damage is reduced by 20%.

When using pummel, you can attack with the shield but lose the damage reduction.

To prevent the advantages of each style being used at the same time, there is a short delay when switching from block to pummel during which you cannot attack. This also applies when switching from the bulwark to other weapons. The length of this delay is 8 ticks, which is slightly more time than a slow hitting boss might take to attack.

Dinh's Bulwark does not work in PvP combat. The block option simply acts as a standard defensive attack style.

It is not possible to cast offensive spells with the Dinh's Bulwark equipped.

The Dragon Hunter Crossbow is a unique range weapon with increased power when fighting Dragons.

Requiring 65 Ranged, the Dragon Hunter Crossbow offers a base bonus of 95 Ranged Attack. Fighting Dragons empowers the weapon, increasing both accuracy and damage by 10%. This stacks additively with Void, not multiplicatively. 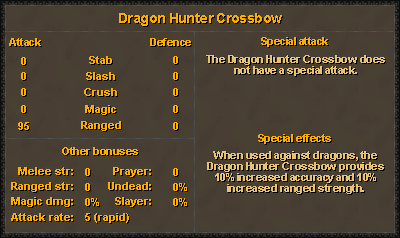 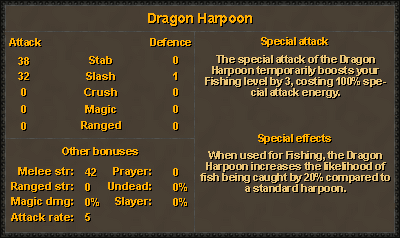 The Dragon Harpoon requires level 60 Attack to equip and level 75 Fishing to use. It can be used from the inventory and does not need to be equipped.

The Infernal Harpoon can be created by combining a Smouldering Stone and a Dragon Harpoon. It is very similar to both the Infernal Pickaxe and Axe in nature.

Whilst Fishing, the Infernal Harpoon has a 1/3 chance of consuming a fish when caught. You will receive a small amount of cooking experience for the fish which was consumed, with the experience gained being dependent on the type of fish.

The Elder maul is a slow, hard-hitting and accurate crush weapon. It requires level 75 Attack and Strength to use. The Elder maul does not have a special attack and hits at the same rate as a godsword. 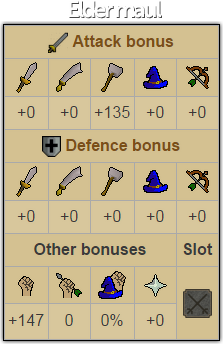 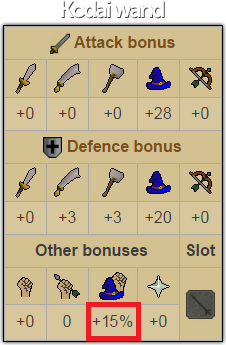 In addition to the stats shown above, the Kodai wand both acts as a water staff and provides a 15% chance of negating rune costs when casting a spell. It can be used to autocast ancient magicks.

The special attack could be used to attack several times in quick succession with improved accuracy. Unlike the granite maul special attack, it is not be possible to use all of these special attack hits at once. You would have to correctly time your use of the special attacks, and would only be able to hit once per game tick.

The forgotten prayers are unlocked with a tradeable scroll dropped as a reward from raids. When the scroll is read, you will be given a choice of learning one of three prayers. After one prayer is learnt, the scroll crumbles to dust.

The three prayers have the following requirements and effects:

Retrieved from "https://oldschoolrunescape.fandom.com/wiki/Update:Chambers_of_Xeric?oldid=3194454"
Community content is available under CC-BY-SA unless otherwise noted.