A new raids rewards developer blog has just gone up over on the forums. Be sure to give it a read!

Since our last developer blog we have received a large amount of feedback on raids rewards. We've gone back to the drawing board and will be offering some brand new weapons in addition to some of the content offered in the previous blog.

The video found below shows off the two new weapons being offered in this developer blog: the elder maul and the elder wand. Please watch the video and give the blog a read to get an idea of what these weapons will be.

The elder maul is a powerful two-handed crush weapon which requires 75 attack and strength to equip. It is accurate, slow and hard hitting.

When designing the elder maul, our primary objective was to create an interesting, balanced and fun alternative to current top tier weapons. There are many scenarios where the maul is ideal, and many where it isn't. 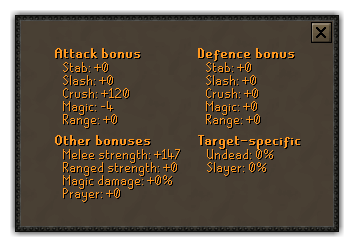 The elder maul does not have a special attack.

The maul attacks at the same speed as a godsword, however it is more accurate and is capable of hitting harder than the godswords normal attacks. The godswords will still have higher max hits due to their special attacks, and will also be able to provide more utility.

We expect the primary use for the maul to be in PvP, however it will definitely have valuable PvM applications as well. Monsters which require you to deal hard hits as quickly as possible, such as the chaos elemental and tortured gorillas, will be perfect for the elder maul. It will, of course, also be very useful against monsters which are weak to crush attack, such as Cerberus, Vet'ion and waterfiends. 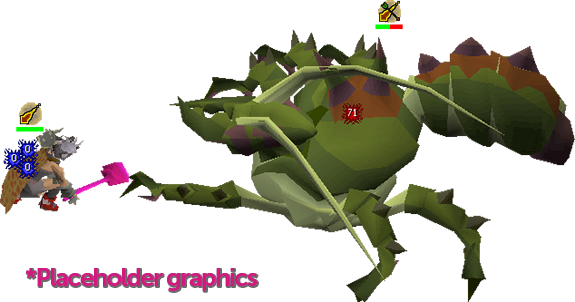 In PvP, we expect the elder maul to introduce a bit more variety. Currently, there are very few weapons to choose from which are viable in PvP. The elder maul will help mix things up a bit, offering a good option for both a primary weapon and a KO weapon.

Overall, the elder maul is a weapon which will help add a bit more variety and choice to Old School for high level players.

The elder wand is a high level magic weapon created from the master wand and an item dropped from raids. The elder wand requires level 75 Magic to equip. 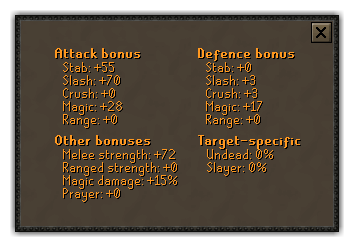 In addition to the stats shown above, the elder wand both acts as a water staff and provides a 15% chance of negating rune costs when casting a spell. It can be used to autocast ancient magicks.

Kodai robes are a new set of magic and prayer robes which provide best-in-slot magic attack.

The robes will require level 75 Magic & Prayer to equip. The robes provide magic attack slightly greater than Ahrim's robes, but lack the defences the set offers. Kodai robes also offer prayer bonus and do not degrade.

The biggest piece of feedback we received for Kodai robes was their potential impact on Ahrim's robes. As a result, we've stripped all of the defences of the robes except for magic defence. This leaves Ahrim's with some substantial stat advantages.

We've also given the Kodai robes some negative melee and ranged defence bonuses to give Ahrim's another slight advantage.

The additional prayer bonus should help the Kodai robes remain just as valuable, while leaving room for Ahrim's to play the role of a tankier of the two sets.

For some Old School players the dragon chainbody, however nostalgic it may be, just doesn't cut it. We see regular requests for the dragon platebody and we feel that raids will be a fitting piece of content to bring it into Old School.

The dragon platebody would require level 60 Defence and would provide the following stats:

The dragon platebody would be created using drops from raids with a dragon chainbody.

Dragon throwing axes provide +32 Ranged attack and strength. The special attack of the axes freezes the target for 5 seconds if damage is dealt and costs 30% special attack energy.

For some time we have discussed the possibility of additions to the Old School prayer book. Prayers such as Rigour and Augury have come up regularly in those discussions, and now we would like to offer a number of new prayers unlocked with raid rewards.

The forgotten prayers are unlocked with a tradeable scroll dropped as a reward from raids. When the scroll is read, you will be given a choice of learning one of six prayers. After one prayer is learnt, the scroll crumbles to dust.

The six prayers have the following requirements and effects:

Following a large amount of feedback from the community, we are no longer offering insignias as a reward from raids.

As always, we are eagar to hear your feedback. Let us know what you think about the above rewards!

Retrieved from "https://oldschoolrunescape.fandom.com/wiki/Update:Dev_Blog:_Raids_Rewards_2?oldid=3504265"
Community content is available under CC-BY-SA unless otherwise noted.