Eggstra! Eggstra! Read all about it! It being this year's Easter event. Rabbits, chocolate, and eggs. Plus there are some changes being made to prevent the griefing of Ironman and also to prevent them from abusing special attack mechanics.

Another year, another Easter on the brink of disaster. Ever the eggsplorer, you should journey south of Falador to visit the Easter Bunny to start this year's cracking Easter event. Hatch a plan with Chocco to tackle the eggciting crisis, and help kickstart chocolate production in time for Easter. This year's event has it all. Eggstreme highs, eggsplosive lows, plenty of yolks to make you laugh, a hoppy ending, and erm, big eggs. 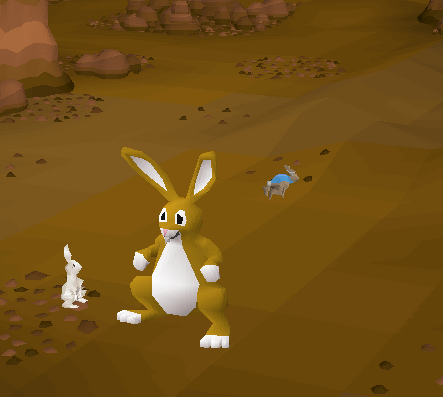 The above image is taken from last week's newspost in which we explained the changes we'd like to make, as well as the reasoning for them.

In last week's newspost we announced our intention to implement some changes to the Corp cave, and the God Wars Dungeon boss rooms. The changes are unpolled, because we believe they're vital to prevent the targeted griefing of Ironmen, and also to prevent Ironmen from abusing Special attacks performed by other accounts. We announced the changes before implementing them to ensure that your voices would be heard, and we could act on feedback we were provided with. Initially we proposed that the change to the Corp cave be made for Ironmen of the combat level of 50 and over. There were concerns that this wouldn't deter griefing because it's too easily attainable and so wouldn't resolve the issue. With this in mind we've opted to increase the combat level required to enter the cave. There were also concerns that by making this change we'd be setting a precedent of catering to Ironmen. There was also a misconception that there would be two caves visible, which would detract from the immersion of the game. This isn't the case, as it'll continue to appear as though there was only one cave, and you'll enter the cave relevant to your account status and level. We do believe these changes are necessary to Ironman mode, both to ensure the enjoyment of Ironmen, but also to preserve the challenging nature of the gameplay by ensuring that interactions with other accounts can't be misused.

The bosses within the God Wars Dungeon will now reset when the room becomes empty. This means that without any players in the room, and provided the boss had taken damage, the boss will reset and spawn again at the usual respawn rate.

The Blast Furnace Bar Stock interface has been replaced with the new Make-all interface.

A slight delay has been added when closing doors within Castle Wars.

The warning which appears when attempting to dive without equipment on Fossil Island may now be toggled not to appear, and may be toggled back on again, by talking to Mairin.

We've fixed a few map tiles to the south of Varrock which would force you to walk elsewhere should you attempt to walk on them.