This week's headline update is the F2P release of Castle Wars. That isn't all for F2P, as Castle Wars arrives alongside a couple of other content improvements. For members there's another new set of mining gloves, and the Desert Elite achievement diary reward becomes that little bit more useful. Plus our usual array of patches and fixes.

Originally released in 2004, Castle Wars is held in high regard among players old and new. We're dedicated to the continued support of the mini-game community and so we elected to poll making Castle Wars available to the F2P community. The question was met with a resounding yes, and today we're delighted to release F2P Castle Wars.

For those unfamiliar with Castle Wars, it's a capture the flag based mini-game played on a grand scale. There are two opposing castles, each representing two gods of RuneScape: Saradomin and Zamorak. The standard of your opposing team must be captured and returned to your base in order to score points. The fray will see you battle atop castle defenses, or in tunnels underground.

How to get there
Castle Wars is nestled in the south-western corner of Kandarin, a long way from White Wolf Mountain. Naturally the lands in-between Castle Wars and the Taverley gate are inaccessible to non-members, and inaccessible they remain. To ensure ease of access to Castle Wars we've added a portal to Clan Wars. The portal will teleport you to the Castle Wars lobby.

Upon reaching Castle Wars it might alarm you upon seeing the castle doors shut tight. This is to ensure that the more exploration-driven among you stay to fight in Castle Wars rather than go wandering off. Clicking the doors will offer a teleport back to Clan Wars. 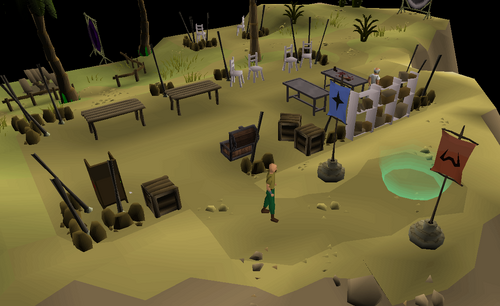 The rewards on offer
Completion of Castle Wars in F2P will continue to offer the same number of tickets as with the members variant. The rewards offered in Lanthus' shop do differ, however. You will be able to purchase the decorative melee armours, hoods, and capes. Halos, decorative ranged sets, and decorative magic sets are not offered because of the accompanying stat increases. 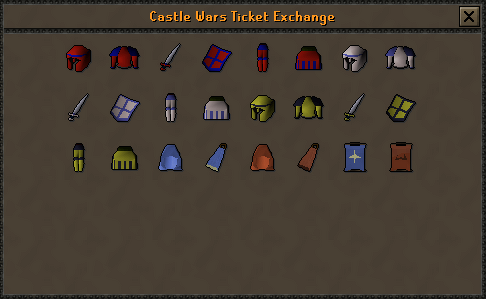 Mod Stone v Mod Sween
To herald the arrival of F2P Castle Wars, Mods Stone and Sween will be competing against one another, and it's going to be on you to determine who will reign supreme! Gear up and head to Castle Wars in World 383! Swear your allegiance to either Mod Stone, Hero of Saradomin, or Mod Sween, Champion for Zamorak.

The robes themselves offer the best magic bonuses in F2P. The top and bottom each arrive with a +2 Magic attack, +3 Magic defence, and +3 Prayer bonus.

Amulet of Accuracy
The mighty Amulet of Accuracy is received upon completion of the challenging Imp Catcher quest. Prior to today the amulet could only be received once per account. Wizard Mizgog must have just stumbled across a hoard of them, because he now offers new amulets in return for complete set of beads (black, red, white, and yellow).

Since the introduction of pools within Player-Owned-Houses we've noticed that Nardah isn't quite the attractive destination it once was. To ensure completion of the Elite Desert achievement diary remains suitably rewarding, we've now added the option to teleport to the task-only Kalphite cave. This is a new option in addition to the existing teleport to Nardah.

Where we make the literally unplayable, playable.