Anybody who has refrained from levelling to 99 or maxing can breathe a sigh of relief, as today sees the release of the new milestone fireworks and notifications. The polled changes to karambwanji and karambwan fishing are effective as of today. The PvP Championship is just days away. And we offer an update on the development of the Make All interface, Fossil Island, and the grotesque guardians!

We love to celebrate the achievements of our players. Today sees the release of all new firework animations for players reaching level 99 in a skill, and a more grandiose animation for those of you who achieve level 99 in all skills.

Reaching level 99 in a skill will now yield a bright and colourful animation, whilst maxing your character will result in a longer-lasting red and gold animation. Very fancy. 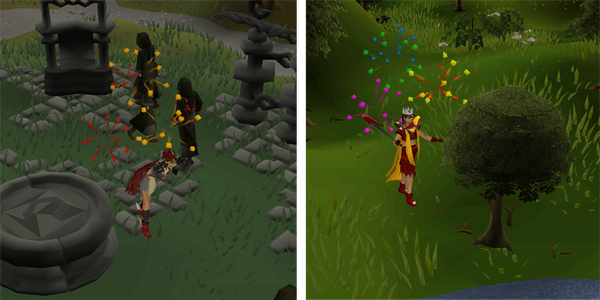 In addition to this you will now receive a notification in your chatbox for every 25 total levels gained, plus a separate message will be displayed when reaching the maximum total level.

During Content Poll 54 we polled a number of changes which would make fishing for karambwan a more viable option for legitimate players.

It is no longer possible to cook raw karambwanji, except when required during the Tai Bwo Wannai Trio quest. All existing cooked karambwanji will be exchanged for raw karambwanji upon login. This was essential to do because otherwise the change to make karambwanji stackable would effectively ensure a very cheap, stackable food source.

For balancing reasons fishing karambwans now grants 50xp rather than the previous 105xp.

The PvP Championship is just days away! Check out the stream schedule to plan your weekend of viewing on twitch.tv/runescape. Join us on Saturday 12th and Sunday 13th August and support your favourite pkers and teams!

Development on the Make All interface is still ongoing. The core is mostly in place, and is carefully being rolled out through the game. Extensive testing would then follow before it is fit for release. We're aiming for release in a few weeks.

Fossil Island is nearing its early September release. The first of two development blogs will be going out later today to whet your appetite for knowledge.

The development of the Grotesque Guardians will be kicking off this month.

Retrieved from "https://oldschoolrunescape.fandom.com/wiki/Update:Fireworks_and_karambwan!?oldid=4515579"
Community content is available under CC-BY-SA unless otherwise noted.