Twelve months ago thousands of players landed on Tutorial Island for the first time in many years. Thus the adventure of Old School began. Today Old School has flourished into a vibrant and active game with a really strong and passionate community. We are really proud of what the community has achieved during the last year and we think a big party is needed.

Over the next two weeks you can visit the Lumbridge Guide or any of the Elven emissaries scattered around Gielinor who will transport you to Old School's first birthday celebration. Once there you can party with some of the NPCs that have been introduced over the past 12 months and reminisce with some really Old School monsters. There is plenty of cake for everyone and even a special birthday gift from us to you.

Aside from the birthday festivities, we've prepared a selection of updates for which you voted in Poll 16. 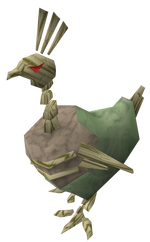 We'll have more updates from Poll 16 next week.

Ever since RuneScape 2 launched in 2004, there's been a long-standing issue involving combat stances. When you switched from a weapon with 4 stances to a weapon with 3, such as going from a two-handed sword to a whip, the game would frequently drop you into the Defensive stance. That was because Mode 3 on a two-handed sword is Aggressive, while Mode 3 on a whip is Defensive, and the game was blindly leaving you in Mode 3. Players have often complained about this, and sometimes gained Defence XP unexpectedly as a result of it.

We've made some changes to the combat system in this update. Now, when you switch weapons, if you're not already in a Defensive stance, the game will try to make sure it doesn't put you into one.

Similarly, when you stop autocasting, the game will try not to put you in a Defensive stance unless you were using the Defensive Autocast setting.

This has involved a fairly substantial change to the combat scripts under the hood. We've done our best to check popular combinations of weapons, but we're never going to catch everything, so we strongly recommend you check the new behaviour of your weapons before your next battle. Please let us know of any issues you find.

We've also addressed some long-standing bugs with the granite maul, whereby its special attack sometimes hit the wrong target, sometimes hit through a wall, and sometimes didn't hit anything at all. Again, this required substantial changes to the item's combat scripts, so we recommend you try it out in a safe place to make sure it's working like you expect before you next go staking with it.

We also want to thank Mod Philip who has pulled out all of the stops and delivered a whole host of game engine updates which has allowed us to offer you more of the updates you want.

As always, tonight at 5pm GMT we'll be holding our weekly Q&A on Twitch TV. We'd love you to join us as we have even more Wilderness stuff to show you!

To talk about this update, come and join us on the forums.

Retrieved from "https://oldschoolrunescape.fandom.com/wiki/Update:Happy_Birthday!?oldid=5101803"
Community content is available under CC-BY-SA unless otherwise noted.