Happy Birthday to us!

It has been 4 years since the release of Old School RuneScape, and Party Pete is throwing a birthday bash of epic proportions!

Head to the Falador party room and have a chat with Party Pete to get started and lend a helping hand.

If you're willing to help out and make this party the best to have ever graced Gielinor, Party Pete will reward you with all of the previous rewards from birthday events:

We've grown a lot over the past 4 years. There are now more Old School players than ever before. To celebrate this, and to give you all a little more room, we've added twelve new worlds!

What about Australian worlds?!

Due to the existing infrastructure we have for hosting Old School worlds in North America, it is a much simpler task for us to add NA worlds than it is for us to expand into Australia.

Australian worlds are still something we are still working towards, as we want to make sure they are as robust and stable as they can be when they arrive. Unfortunately we aren't able to put a timeframe forward at this point, but we will keep you all up to date as things progress.

A couple of weeks ago we ran a poll including 10 PvM Quality of Life updates. 9 out of those 10 updates made it past the poll and can now be found in game!

It is now possible to right-click the ladder leading to the DKs and select the 'Slayer' option to access a separate version of the lair.

Safe Peeking for KQ and DKs

Two new cracks have appeared above both the Kalphite Queen and Dagannoth Kings' lair. These cracks can be used to check whether or not adventurers are already taking on the bosses without having to worry so much about monsters attacking you.

The cave outside the Corporeal Beast’s lair has been made smaller. This means that it will be less likely to have a map loading boundary right in the middle of the Corp’s combat area.

The special effect of the Elysian Spirit Shield now applies to the following attacks that deal damage through protection prayers: 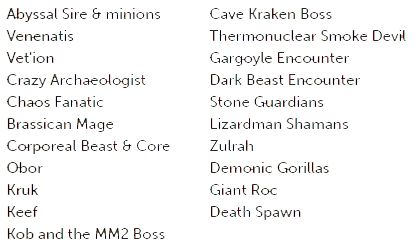 The accessibility and appearance of Redwood Trees have now been drastically improved!

Aside from looking distinct, there are now many more spots where you can chop away at the two Redwood Trees found within the Woodcutting Guild.

Retrieved from "https://oldschoolrunescape.fandom.com/wiki/Update:Party_Pete%27s_Birthday_Bash?oldid=7323506"
Community content is available under CC-BY-SA unless otherwise noted.