This week sees the release of Misthalin Mystery - the 2016 Halloween event adapted into a quest! We've also made some changes to the drop rate and nature of the Rigour and Augury prayer scroll, and have made a bunch of graphical quality of life updates.

Both free-to-play players and members alike can help solve the Misthalin Mystery. This quest, based on the 2016 Halloween event, can be started in the south-eastern corner of Lumbridge Swamp by talking to Hewey or Abigail.

Pirate Jackie the Fruit, found at the Brimhaven Agility Arena, now offers a Graceful recolour to match the Agility skillcape. This can only be applied to a plain Graceful set and costs 250 tickets.

If you wish to revert your dark blue Graceful, you can use it on Pirate Jackie the Fruit. Beware, you will not get your tickets back when doing this.

The Max Fire Cape now features an unmoving version of the texture found on the Fire Cape.

The sand found within the Piscarilius area in Great Kourend had been playing with some people's eyes a little bit. We've now smoothed it out so this is no longer the case.

Previously, the Steam (or), Mist and Dust Battlestaves were unusually short for staves in Old School. We've now added to their length. 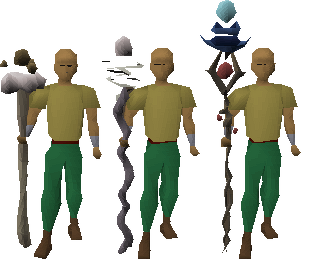 Since the release of Raids we have seen continued concerns regarding the very high cost of the Prayer Scroll reward. The extremely high cost has led to a very small number of players being able to unlock either Rigour or Augury.

With the comparison to Piety being made, and Piety being a free unlock, a large portion of the community are not happy with the high cost of these prayers.

To address this, we have now made both Prayer Scroll rewards from Raids twice as common.

We've also slightly increased the chance of receiving a unique reward from Raids to account for the shift in the unique table caused by this change.

We'll be closely monitoring both the prices of the scrolls and the earnings from Raids to ensure these changes have had the desired impact.

A rare circumstance in PvP would occasionally lead to untradeable items disappearing quickly when on the ground. In order to prevent this issue occurring, we've made a change to how broken items act in PvP scenarios.

Below level 20 Wilderness, broken items which would have been lost on death will now remain in your inventory. This does not protect your untradeable items from breaking, and it has no effect on the loot your opponent receives.

Retrieved from "https://oldschoolrunescape.fandom.com/wiki/Update:Prayers_Scrolls,_QoL_%26_a_Quest?oldid=7323507"
Community content is available under CC-BY-SA unless otherwise noted.