In the dwarven mines below Falador, Prospector Percy has struck it lucky. He's discovered a series of unique mineral veins, and invented a machine that extracts a variety of useful ores out of the raw pay-dirt. Now he's opened up his mine for everyone to use. 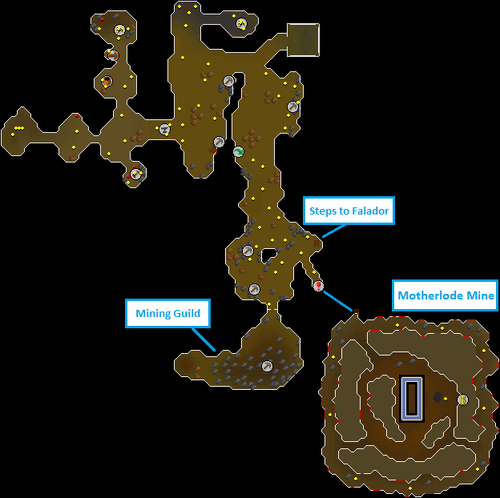 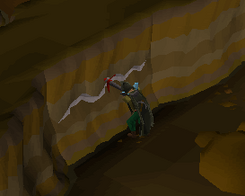 Once you have level 30 Mining grab your pickaxe and delve into the Motherlode Mine to have a bash. Once you've got yourself some pay-dirt, drop it into the hopper to get it cleaned. Your ore will be deposited in the sack at the end of the cleaning channel, and you'll receive extra Mining XP depending on what ores you've obtained.

Percy won't charge you for using his machine, but he'll expect you to fix it whenever it breaks - which happens quite often, since Percy's not an especially tidy chap. A few whacks with a hammer will get those struts back into alignment for a while.

Amongst your ores, you'll occasionally find little golden nuggets. Percy will trade these for pieces of a new Prospector outfit. You can wear it to get a little bonus XP while you're mining, with an additional bonus for wearing the complete set (just like the Lumberjack outfit does for Woodcutting).

Do be careful, though. Percy's not been very thorough about supporting the walls of his mine, and you might get a nasty chunk of rock on your head. 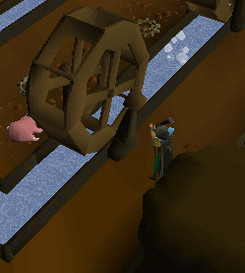 Poll 18 has now closed, and we're now working on the updates that got the community's approval. For this week, we've changed the Castle Wars lobby so that the entire room is a safe area on PvP worlds, to cut down on luring.

The Easter holiday event will remain open for one more week. If you haven't unlocked your Easter items yet, hurry up!

We'll be running our usual Q&A livestream tonight on Twitch at 5pm BST, introducing the new artist - Mod Alfred. You can tweet your questions to @JagexMatK beforehand.

To discuss this update, go here.

Retrieved from "https://oldschoolrunescape.fandom.com/wiki/Update:The_Motherlode_Mine!?oldid=411261"
Community content is available under CC-BY-SA unless otherwise noted.