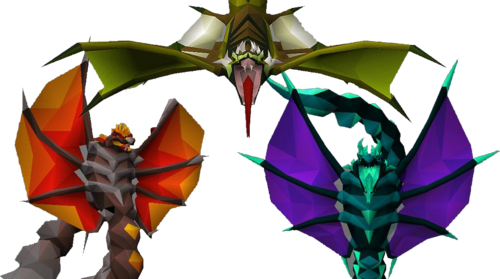 This boss takes challenge to the next level in Old School. If you dare take the snake on, be prepared for a battle to remember. The highly anticipated solo boss is here. South of Isafdar, deep in the midst of the dank, toxic swamp... Zulrah awaits. 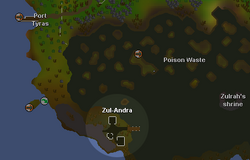 If you are brave, or foolish, enough to take on the challenge of killing the beast, head south from Port Tyras until you arrive at Zul-Andra.

You can also access Zul-Andra through a fairy ring found on a nearby island, however you will need 76 Agility in order to maneuver your way onto the mainland.

When in Zul-Andra, we encourage you to play with your in-game music enabled so you can truly get a feel for the area. Two new music tracks have been added to the game to help you really dive into the experience.

You can talk with the various inhabitants to get an idea of how Zul-Andra came to be and of their relationship with Zulrah.

You must speak to High Priestess Zul-Harcinqa before being able to fight with the snake boss.

As promised, we are not going to be revealing the mechanics of Zulrah. We want you to go in blind and be faced with the challenge of learning the mechanics yourself. We feel that walking into the unknown will be a big part of the experience and we are looking forward to seeing how the tactics of the community develop as time goes by.

As Zulrah is an instanced solo boss we have had to create a unique way of dealing with items lost on death.

When you die to Zulrah all of your items will be given to the NPC Priestess Zul-Gwenwynig. You can collect these items by returning to Zul-Andra and talking to the Priestess.

If you die in any way before collecting your items from Priestess Zul-Gwenwynig, your items will be lost.

Venomous poison is a form of poison that gets stronger as time goes on. The damage of venomous poison starts at 6 and increases by 2 every time it hits.

Venom can be cured like any poison but requires two doses, the first dose reverting the venom to standard poison and the second to cure it. Alternatively, anti-venom can be used to cure venomous poison in a single dose and to provide a period of immunity.

All monsters that are immune to poison, such as bosses and some quest monsters, will also be immune to venomous poison. TzTok-Jad is not affected by venom and if a venomous weapon is used against him he will treat venom as poison.

Venomous poison is applied by all of the signature drops of the snake boss.

Zulrah's scales are a 100% drop of the snake boss. They will be dropped in varying quantities and can be used to recharged the signature drops of the snake and to create anti-venom.

Adding scales to an antidote++ will create an anti-venom potion. This requires 87 Herblore. This potion cures venom poisoning in a single dose.

The toxic blowpipe is a level 75, 2-handed weapon that uses darts for ammo. It coats all darts that it fires with venomous poison giving a 1 in 4 chance of it affecting your opponent.

In order to use the blowpipe you must charge it with both Zulrah's scales and darts of your choice. To completely fill the blowpipe it requires 16,383 darts and scales. The blowpipe takes roughly 12 hours of combat to empty from 100%.

The blowpipe carries +40 ranged strength and +60 ranged attack which stack with the stats of the darts you use. When used on rapid the attack speed of the blowpipe is 2, equal to that of darts.

The magic fang can be attached to either the Staff of the Dead or an uncharged Trident of the Seas.

In order to use the Toxic Staff of the Dead you must charge it with Zulrah's scales. To completely fill the staff it requires 11,000 scales and will last roughly 15 hours of combat.

The toxic staff increases the magic attack of the standard staff to +25 and gives it a 1 in 4 chance of inflicting your opponent with venomous poison when using an offensive spell.

Attaching the magic fang to an uncharged trident of the sea to creates aTrident of the Swamp (uncharged). This also requires 59 Crafting and a chisel. This increases the magic attack of the staff to +25, increases the base spell damage by 3 and has a 1 in 4 chance of inflicting your opponent with venomous poison.

In order to use the serpentine helm you must charge it with Zulrah's scales. To completely fill the helm it requires 11,000 scales and will last roughly 15 hours of combat.

This helmet requires 75 Defence and provides the following stats and effects: 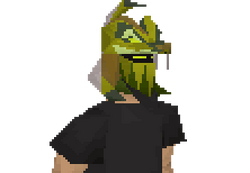 When wearing the serpentine helm you are immune to all poisons and venom. You also have a 1 in 6 chance of inflicting your opponent with venom poison when you are attacked.