Morgan (located in Draynor Village) will tell you that a vampire is causing distress. He wants you to kill it. Go upstairs of Morgan's building and look for a cupboard. When you've found it, open it and search it to receive garlic. Morgan will also tell you to go to the Blue Moon Inn in Varrock, and talk to Dr Harlow.

Note: Go ahead and get the garlic from the cupboard upstairs in Morgans house.

Go to Varrock and head to The Blue Moon Inn located south of Varrock Square. Once inside, talk to Dr Harlow. Tell him Morgan needs his help. He will want you to buy him a beer. Find the bartender, buy a beer, and then talk to Dr Harlow. He will talk about vampires and give you a stake.

Next, buy a hammer from a general store if you don't already have one. You can buy the hammer from the Varrock General Store, which is just north of Blue Moon Inn. The closest general store to Draynor is in Lumbridge.

Now that you have the required items, you must now fight the vampire. Make sure you have a weapon, armour, food, garlic, a hammer, and the stake. Go to Draynor Village, and then head north to Draynor Manor. Once inside, go east towards large stairs that lead downwards. Go down them. There will be a coffin in the center of the room. Open it and the vampire, Count Draynor, will pop up and attack you. If you have garlic, the Count will be weakened, though he will still pose a huge threat to players with a low combat level. When you defeat the Count, you will automatically stab him with the hammer and the stake. When the Count is dead, you will have finished the quest. 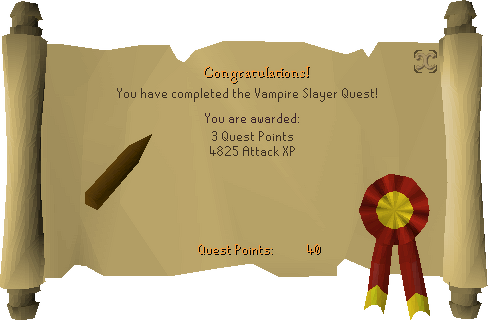 Retrieved from "https://oldschoolrunescape.fandom.com/wiki/Vampire_Slayer?oldid=11123925"
Community content is available under CC-BY-SA unless otherwise noted.