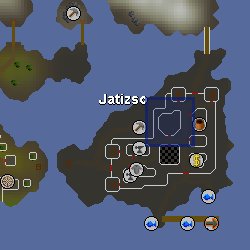 Vanligga Gastfrihet owns a restaurant on Jatizso, north of King Gjuki Sorvott IV. There are two other characters in the restaurant: Grundt and Brendt. They are two dwarven traders from Keldagrim who have overstayed their welcome at Vanligga’s restaurant.

Vanligga has to pay taxes in The Fremennik Isles quest, although the player has the option to pay them for her. By doing this she will open her store, Contraband Yak Produce, which sells various illegal yak goods. A player may also pay 5,000 coins to her after the quest, if they did tax her.

Retrieved from "https://oldschoolrunescape.fandom.com/wiki/Vanligga_Gastfrihet?oldid=8694860"
Community content is available under CC-BY-SA unless otherwise noted.