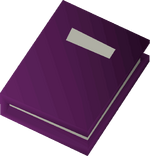 Verzik vitur - patient record is a book written by Vulcan Orvoros and obtained from the Grand bookshelves in Verzik Vitur's treasure vault beneath her throne room, which can be accessed after defeating her in the Theatre of Blood.

The book explains the reason why Verzik Vitur is obese, how she can be harmed with non-silver weaponry and her ability to shapeshift into a spider-hybrid.

I have been asked by Verzik herself to look into a minor illness that she believes was caused by the bite of a nylocas. Verzik has requested absolute privacy in this matter and as such I am seeing her in her personal chambers in Ver Sinhaza.

Verzik claims to have been suffering from a fever for the past few days. She says that this started not long after she was bitten by one of her nylocas. The nylocas in question was a new variant, the result of her extensive breeding program. However, the not long after biting Verzik and as such cannot be examined.

After a quick inspection, I can confirm that Verzik is suffering from a slight fever, something isn't uncommon in vampyres. I have prescribed a guam potion that should help it clear up.

I have been asked to return to Ver Sinhaza to see Verzik again. Although she has been taking the guam potion for a week, her condition has actually deteriorated rather than improved.

An obvious change during this visit is the apparent weight gained since I last saw her. She claims this is due to the illness preventing her from exercising. However, I am concerned over how rapid the increase has been.

I have decided to run a few more tests on Verzik to try and determine the cause of her illness. I will have the results of these in a few days. Once I have them, we can determine a suitable course of action.

I have the results of Verzik's tests and as such I have returned to Ver Sinhaza again. I had to wait a short while as Verzik was having a meeting with Ranis Drakan which meant we didn't have as much time for our appointment as usual.

Verzik's condition has not improved since we last met. Her weight increase does not appear to have slowed. However, what is more concerning is the results of her tests. The tests show a large number of what appear to be tiny eggs, possibly from the nylocas that bit her. The presence of the eggs seems to be having a negative impact on her vampyric abilities, including her immunities. Her ability to shapeshift however, seems unaffected.

I have asked Verzik to spend a few days at my surgery in Darkmeyer so that I can properly monitor her condition and perform an operation to remove the eggs. However, she has refused, not wishing to leave Ver Sinhaza. As such, I will need to perform the operation here instead. This will take place tomorrow before her condition further deteriorates.

Today I performed the operation on Verzik at Ver Sinhaza. I was once again delayed by another of Verzik's meetings, this time with that crazed vampyre they call the butcher.

The operation went surprisingly smoothly and all of the eggs appear to have been removed. Verzik has requested that I let her keep some of the eggs for experimentation. I agreed, after all, she's not the kind of person you deny. I also took some eggs myself so I could inspect them further.

I have arranged to return in a few days time to see how things are doing but I hope that the symptoms will now subside.

Something's gone wrong. Very wrong. I've returned to check up on Verzik and found something horrifying. There was something else inside her and the eggs have returned. I tried to remove them but Verzik stopped me. It's clear her mind is no longer her own. She has insisted I leave.

I tried telling her she needs help. That i need to take her to my surgery. She has refused. I can't change her mind and I have no power to force her. Instead, all I can do is finish these notes and leave. Verzik has been giving me a strange look ever since I arrived and I no longer feel safe.

Retrieved from "https://oldschoolrunescape.fandom.com/wiki/Verzik_vitur_-_patient_record?oldid=8694023"
Community content is available under CC-BY-SA unless otherwise noted.