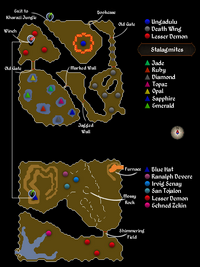 The Viyeldi caves play a large role in the Legends' Quest and can only be accessed during and after the quest. To enter, the player must go to the north-western part of the Kharazi Jungle and squeeze into the rock there. This requires 50 Agility. The dungeon's history remains largely unknown, but it is suspected that it was constructed a long time ago by the native Kharazi tribes. To progress in the dungeon, certain tests must be completed, which can require items and levels in skills.

To go deeper into the dungeon, the player must squeeze through the crevice behind the bookcase in the first room. To venture even further, a pickaxe and lockpick are needed to break the large rocks and to unlock the old gates, respectively. You will then need to use your Strength to force a door, Agility to jump over a wall, and finally runes and an uncharged orb to cast a Charge Orb spell.

After the Legends' Quest, this dungeon becomes obsolete for most players. Those completing the Karamja Diary will have to return to kill a death wing for one of the hard tasks, and there is a master clue located in the cave, but other than those, the dungeon usually remains unvisited. The final room of the dungeon contains three lesser demons, so it could potentially be used to kill them, but other locations are much easier to get to.

Retrieved from "https://oldschoolrunescape.fandom.com/wiki/Viyeldi_caves?oldid=9050144"
Community content is available under CC-BY-SA unless otherwise noted.