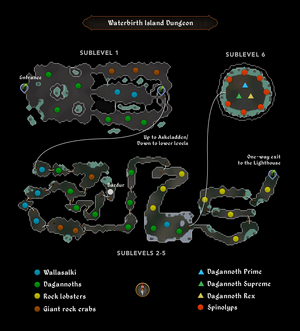 Waterbirth Dungeon is a large dungeon found on Waterbirth Island and consists of several sublevels that contain powerful, aggressive monsters. Players must be prepared to encounter all three Combat styles. Few safespots are available, so those adventurers who wish to explore the dungeon must take caution.

As soon as the player descends the stairs to enter the dungeon, they will be in a massive cavern, also known as Sublevel 1, filled with level 90 Dagannoths with their spawn and fledglings. They use Melee attacks and hit high and accurately. Protect from Melee is highly recommended for players who wish to train here. There are also a few rock crabs to the north part of the area. Most potential safespots contain eggs that, when approached, hatch and release dagannoth spawn that will attack the player. However, once the dagannoth become non-aggressive, they can be safely ranged across the skeleton just north-east of the entry stairs.

At the far eastern end of the cavern are three circular doors with two buttons next to each of them. To open a door, one player must stand on a button while his companion stand on the other. Alternatively, the player can use the pet rock to substitute as a "player" to open the doors. Depending on which door is opened, the player will encounter the following monsters that use one of three attack styles:

You may want to be careful, as a few Dagannoths may have gotten stuck in each of the rooms.

Opening the door to the central room

Each of the three paths leads further east to a central room with a ladder. However, it is blocked by three door-supports. The props can be knocked down with either Magic or Ranged (weak attacks may not work), but the player cannot knock down the prop in front of them; they can only knock down one in the opposite direction. In order for the prop in front of the player to be knocked down, another player must do it from the opposite direction. An easy way to get past them is by using the Rune thrownaxe's special attack on the middle door-support. The thrownaxe will fly through all three door-supports.

Once the props are knocked down, they will eventually be put back up again. Players should use the ladder immediately; however, they should be aware that two Dagannoth spawns will pop from the eggs nearby and the Wallasalkis and ranged Dagannoth can attack the player.

The Dagannoths in the main cavern (not the ones in the path) sometimes drop dagannoth hides used to make Fremennik armour. The monsters in each of the three paths drop raw materials used for the armour. For example, Wallasalkis drop pieces used for making Skeletal armour.

Below is a quick overview of Waterbirth Island Dungeon and the rooms and protection prayers that should be used in each room.

The following is a more detailed overview of the dungeon.

Sublevel 1 consists of these three rooms. The large Dagannoth-filled cavern that players first arrive in when they enter the dungeon is room one. Room 2 consists of the three paths, and Room 3 is the small room with the props and the ladder leading up or down.

This room contains three Wallasalkis that use Magic. Protect from Magic is highly recommended.

This room contains Giant Rock Crabs, initially disguised as large stones. Upon entering the room, the player will be safe providing that the player stays where they are. However, if the player goes near a crab, it will attack. Players may want to go near the Giant Rock Crabs currently moving, as those will be non-aggressive.

This room contains Melee and Ranged Dagannoth. Protect from Ranged is recommended if the player plans to run through the room; otherwise, they should use Protect from Melee.

There are two ladders in this room. Going down the south ladder will soon lead the player to Bardur, who is fighting Dagannoth fledglings. If the player gives him certain equipment to keep him going, he will hand the player a cooked shark in return, which may prove a bit helpful if the player wishes to explore the dungeon further.

Going down the west ladder will continue to lead to the Dagannoth Kings.

This room contains Wallasalkis. Protect from Magic is highly recommended.

This room contains a single Wallasalki. Protect from Magic is highly recommended. Players who do not wish to be attacked by other monsters may find this room a good place to kill Wallasalkis as there is only one spawn, and the room is small.

This room contains Wallasalkis. Protect from Magic is highly recommended.

This room contains Giant Rock Crabs and can also initially serve as a resting point. Protect from Melee is recommended when travelling through the room.

This room contains Melee and Ranged Dagannoth. Protect from Ranged is recommended if the player plans to run through the room; otherwise, they should use Protect from Melee.

This is a long corridor filled with a few Melee Dagannoth. Using Protect from Melee will be good enough to block their attacks. The first part is usually unoccupied by monsters, so it can also serve as a resting point.

This room is a very long corridor that extends east, south-west, and then opens up to a big room with the ladder that leads to the Dagannoth Kings, and then narrows down to another corridor that leads to an alternate exit going to the Lighthouse. The first section of this room contains approximately ten level 142 Rock lobsters that are similar to Giant Rock Crabs in the fact that they disguise themselves as rocks, and attack any player who goes near them. However, rock lobsters have a higher max hit and attack very quickly (at 1.2 ticks); however, since you will be running, most of the rock lobsters should be unable to reach you.

As the corridor turns south-west, more rock lobsters continue to lie in wait. You may want to use Protect from Magic now as there will be Wallasalkis in there, in addition to both types of Dagannoth. The ladder in the middle of the narrow path leads you to the Dagannoth Kings.

This is the large roughly circular arena where the three Kings reside. Each King uses a different combat style, and they hit hard. It is extremely difficult to enter the room without two or more of the Kings attacking the player; they must have a companion to enter first and distract them, allowing the player to enter and run to a far side of the arena. Players MUST be prepared before going down the ladder, or they may die a quick death.

This contains two rock lobsters. Protect from Melee is recommended.

This contains three rock lobsters. Protect from Melee is recommended.

This contains seven rock lobsters. Protect from Melee is recommended. This is also another good room to burst or barrage for Magic experience, and is usually empty.

Retrieved from "https://oldschoolrunescape.fandom.com/wiki/Waterbirth_Island_Dungeon?oldid=8688076"
Community content is available under CC-BY-SA unless otherwise noted.