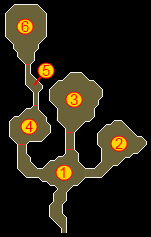 The Waterfall Dungeon is a set of connected caverns underneath the Baxtorian Falls. The dungeon can be accessed during and after the completion of the Waterfall Quest, and is an important destination in the quest.

When you have both of these items, go to the house above the Baxtorian Falls. West of it, behind a gate, there is a raft. Click the raft to ride it and you will crash into a little island.

You now will be on a small ledge with a barrel and an entrance. If you have completed Waterfall Quest or have Glarial's amulet with you, you may safely enter the dungeon. Otherwise, the barrel allows you to leave the ledge without losing Hitpoints.

If you try to enter without the amulet, or if you forgot to use the rope instead of either of the left-click options, you will fall down the waterfall and wash up to the south, losing 8 Hitpoints. You will then have to run back north onto the top of the waterfall and start over.

Within the dungeon, aggressive monsters range from level 16-86, with the higher-levelled fire giants reaching a max hit of 12. The dungeon is popular among Ironmen, due to the much sought after rune scimitar drop from the fire giants. The dungeon consists of six different areas:

The Waterfall Dungeon is often used to kill fire giants. The safespot on the northern side of the fire giant room makes it popular for low-mid level Ranged training.

There are four different monsters in this dungeon: