The south-west corner of Lumbridge swamp 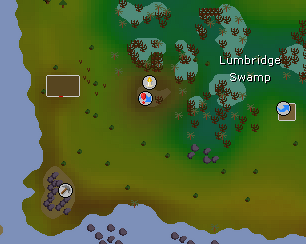 The mine contains seven coal rocks, five mithril rocks, and two adamantite rocks. It is a mine for more experienced miners. The closest bank from this mine is the Draynor Village bank; walking/running there takes about 1 minute and 10 seconds, while teleporting to the cabbage patch (using an Explorer's ring 2) and walking/running from there to the bank only takes about 40 seconds.

Although there is no path leading to this mine, following the shore line either south from the causeway to the Wizards' Tower or west from the eastern mine site will lead you to it.

Though this mine is usually quite uninhabited and, therefore, usually a good spot to mine, this mine can sometimes get very busy. At these times, it may be profitable to try another world to find a more secluded area. Use the Explorer's ring 3 to speed up running time to the bank, or rest during the waiting time for coal to spawn.

A good way for players with 43 Magic and 50 Smithing to make mithril bars is mining mithril and coal and then using the Superheat Item spell, thus reducing the number of trips to the bank considerably.