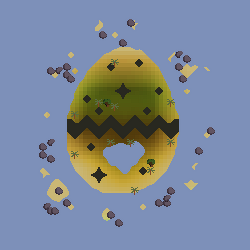 Wester Island is the name of a small, egg-shaped island found in the Western Sea, far south of Zul-Andra. It was first seen on the official world map that was released at the same time as the Chambers of Xeric as an easter egg, and was later revealed to be the location for the 2017 Easter event.

Currently, players cannot reach the island by any means, but it can still be seen on the in-game world map.

The island is visited during the 2017 Easter event, where players must help the Easter Bunny's son, Chocco the Wester Bunny, create new flavours of chocolate eggs.

The island contains many resources that the Wester Bunnies use to create unique easter eggs, such as wester bananas and the finest sea salt.

The island is split in the middle into two through a large crack, where water from the ocean falls into the cavern below, where the Wester Bunnies. According to Milkee, Chocco's assistant, the entire cavern is made of wester chocolate.

Retrieved from "https://oldschoolrunescape.fandom.com/wiki/Wester_Island?oldid=8690381"
Community content is available under CC-BY-SA unless otherwise noted.