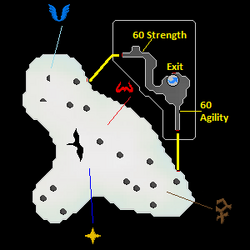 The Wilderness God Wars Dungeon is a multi-combat area located within a cave east of the Forgotten Cemetery in the level 28 Wilderness. It contains monsters from the main God Wars Dungeon. The cave was opened to the monsters when an underground tremor caused a deep fissure to open up, which caused the creatures to climb through the fissure and populate the cave. Like the main God Wars Dungeon, all monsters in the dungeon are aggressive to any player unless they have equipped at least one item that is devoted to their god. The entire area counts as the Wilderness. Players will be able to attack you here.

The dungeon has a small, empty cavern that splits apart into two different paths; one will lead to a large boulder which can be moved with 60 Strength, or pass through a jutting wall which requires 60 Agility. A small crevice is behind the obstacle, which can be used to enter the main dungeon. The crevice near the boulder drops you off in Armadyl's section of the dungeon, and the one near the jutting wall drops you off near Bandos' section of the dungeon.

The wilderness God Wars Dungeon works the same way as the main dungeon - players can wear the respective god equipment to make monsters aligned to their god unaggressive.

The main attraction of the dungeon is the ecumenical key, which all monsters, except the Aviansies, in the dungeon can drop. Players can have up to 3, 4 or 5 of these keys in their bank, which can be increased as more Wilderness Diary tasks are completed. The keys allow players to skip the 40 killcount needed to enter the general's room and makes it useful if they died in the room or running to the boss immediately as Armadyl and Saradomin killcount takes considerably longer compared to Bandos or Zamorak's. The Aviansies in the dungeon are able to drop noted adamantite bars, much like the aviansies in the main dungeon when players complete the Hard Fremennik Diary.

While the area is dangerous due to the potential of being attacked by other players, the dungeon is a good spot for a spiritual creature task if the player cannot kill mages, since there are plenty of warriors and rangers in Saradomin's section of the dungeon, and you can teleport out quickly if you get attacked, as most of the dungeon is below level 30 Wilderness.

There are 4 tasks of the Wilderness Diary to be completed in this area: