I wonder what this does.
Wilderness obelisks are members'-only teleportation devices in the wilderness. They can be very helpful when reaching certain locations, such as the Chaos Elemental, Lava Maze and lava dragons just to name a few. However, they can sometimes lead players into wandering player killers, and are not an ideal escape from them either. When activated, the obelisks won't teleport players who are Tele Blocked. Players may use this to their advantage by luring PKers onto these obelisks, causing them to be teleported and thus providing an increased chance of escape for players.

There are six Wilderness obelisks. Each obelisk, when activated, will teleport anyone standing on the pad after a few seconds to another pad, which is chosen at random. These obelisks are activated by interacting with any of the outer 4 pillars, and standing in the middle. Users receive the message, "Ancient magic teleports you somewhere in the wilderness" upon teleportation. This suggests that these obelisks are run with Ancient Magicks, which is highly likely, as the Wilderness was once Zarosian territory. 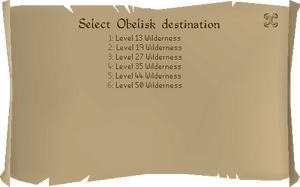 Players can also teleport to these obelisks using an Obelisk found in their own or a friend's Player Owned House. Although these devices are safely outside the Wilderness, they still follow the same behaviour of those found inside the Wilderness. Players are teleported to a random obelisk destination unless they have the hard Wilderness Diary completed, which allows them to choose their arrival point.

The obelisks are found in the following locations:

After completing the hard Wilderness Diary, players are given the ability to choose their teleport location. This can be extremely helpful for those who are boss hunting or doing clue scrolls.

Retrieved from "https://oldschoolrunescape.fandom.com/wiki/Wilderness_Obelisk?oldid=8690379"
Community content is available under CC-BY-SA unless otherwise noted.