View source
watch 02:53
GTA: The Criminal Enterprises - The Loop
Do you like this video?
Play Sound
RS
Loading...

A venerable and rich sage. 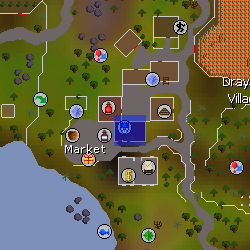 Maybe not all that wise yet, but pretty smart.

A venerable and rich sage.
Please add a map!

A venerable and rich sage.
Please add a map!

Dionysius, also known as the Wise Old Man is a legendary and very powerful Saradominist wizard and former adventurer, currently residing in Draynor Village. Under his judicious alias, Dionysius, he is infamous for the Draynor Bank Robbery. He wears light brown robes, a regular blue cape, partyhat & specs, and wields a short staff.

When asked, he will tell you about all the adventures he had throughout Gielinor. He can also look into your bank to remove any junk, or unneeded free to play quest items. Lastly, he can also assign various tasks on member worlds and give small rewards in return if the player asks him, "Is there anything I can do for you?"

During the 2014 April Fools event, players could utilise the Sailing skill and visit an eastern island that may be inhabited by the Wise Old Man. He could be seen wearing beachwear instead of his usual robes.

He also attended the 2018 Birthday event, where he could be seen with several other iconic Old School RuneScape NPCs.

Players can purchase the Quest point cape and the Quest point hood from him for 99,000 coins, once they have completed all quests in the game, which is a total of 266 Quest points. A reason why he sells the Skillcape can reflect on how the flashbacks of his adventures that he shows to the player are very similar to cutscenes that the player has encountered before, but with the quest's respective NPCs.

In his youth, Dionysius (then called the Wise Young Man) was a hero who roamed RuneScape to help those in need. One of these heroic feats was assisting the Keldagrim Black Guard in driving out a group of rogue ice trolls led by Mother who attempted to storm the city. Mother's group would eventually settle in Weiss, vowing revenge on their sworn enemy.

Some of his adventures in his youth included journeying to the Kalphite Lair, where he fought the Kalphite Queen; traveling to Sophanem, where he vaporized a Drunken Dwarf with Saradomin Strike; battling Dad in the arena; killing an ogre shaman; and battling The Shaikahan.

As he grew older, Dionysius began to feel bitter that he had not been "adequately" rewarded. By this time, he had taken residence in a small house in Draynor Village.

His most notorious act was the robbing of the local bank, during which he killed several people. One can watch the robbery's recording by speaking to the guard outside the bank - free for the first view, and for a fee of 50 coins afterwards. One of these unfortunate victims, an NPC named Elfinlocks, dropped a blue partyhat, which the Wise Old Man claimed for himself due to its rarity and visual appeal.

He plays a small role in freeing Sir Amik Varze from the Culinaromancer, where he provides the player with a Book on chickens to help them locate the Evil Chicken.

The Ring of Charos

The adventurer, tasked by Ellamaria to grow a garden for her husband, was unsure of where to start as she demanded that the seeds be gathered through persuasion. They visited Dionysius, who was surprised that she had sent them on an errand and gave them a short story about her past. Upon learning that they possessed Charos' ring, he told them about Charos' powers. He agreed to reactivate the ring, but only if they could prove that they had a knack for diplomacy. Once the adventurer passed his test, he enchanted the ring and sent them off.

Herman Caranos would encounter an adventurer, who helped them repel a sea troll raid just as they were conversing. Unsure that they could handle the threat alone, he tasked them with bringing Dionysius to the Piscatoris Fishing Colony. The adventurer visited Dionysius and he was surprised that people still remembered his good deeds, deciding that it would be his final adventure. Upon arriving and repelling the trolls, Dionysius tasked the adventurer with finding an army after the colony's leader, Arnold Lydspor, sent most of the colonists away for their own safety. He told them to seek out Wizard Frumscone and to use his zombies, but Frumscone was unable to fulfill the request because everyone would keep asking him for zombies if he helped them.

Dionysius would later be recruited by Aeonisig Raispher after learning of a new draconic threat by the Dragonkin Zorgoth and his creation Galvek. Dionysius would participate in the battle, fighting alongside Brundt the Chieftain against a red dragon, which the adventurer assisted in killing.

Along with the other heros, Dionysius would assist the adventurer in taking out a mithril, adamant and rune dragon. He and the others would later protect them from two brutal black dragons. When the adventurer slew Galvek, he congratulated them for their heroic feat.

Dionysius makes a small appearance in Making Friends with My Arm, where Odd Mushroom tells the adventurer why the trolls of Weiss hate him. The adventurer recruits him to create a ploy to trick Mother into allowing My Arm to marry Snowflake. He initially declines as he is not a family mediator, but accepts when the adventurer reminds him that they owe him one for saving him from the Sea Troll Queen. He tells them to create a coffin and a Reduced cadava potion, which he drinks and is soon placed in the coffin.

My Arm presents him to Mother, who is suspicious because the two lack battle wounds. The ploy fails when Dionysius starts snoring, then passes gas, enraging Mother and sends him, the adventurer, My Arm, Snowflake and Odd Mushroom into jail. Odd Mushroom dies from his wounds. Dionysius assists the adventurer against Don't Know What and Mother, partying with them after Mother is killed by the adventurer.

Wise Old Man is the solution to the hard anagram clue: Slide Woman. His challenge answer is 28.

Note that if the Swan Song quest is in progress, the Wise Old Man will not be able to help with a Treasure Trail until the quest is completed.

The Wise Old Man can assign various tasks on member worlds and give small rewards in return. The tasks assigned fall into three categories.

The most common tasks are to fetch between 3 and 15 of one of the following items (this list may not be exhaustive). They can be brought in more than one load. The Wise Old Man will not accept bank notes, asking what use they would be to him.

Some tasks require the player to deliver a letter to one of the following NPCs. In these cases the recipient will reward the player, rather than the Wise Old Man. The player can read the letter before delivering it.

The thing under the bed

Finally, the Wise Old Man will occasionally ask the player to investigate the thing under his bed; the player must then defeat it in combat.

Upon completing an item or delivery task, the player will receive a random reward from the following list:

Upon completing the task of fighting the thing under the bed, the player will receive Hitpoints experience.