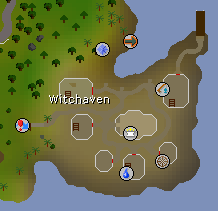 Witchaven is a small village east of Ardougne. It provides access to the Fishing Platform and features heavily in the Sea Slug and Slug Menace quests. It is also a notable fishing spot.

To the west of Witchaven is Ardougne, where the nearest teleport spot is. The Legends' Guild is just to the north, and you can access the Fishing Platform by talking to Holgart or Jeb, depending on which quests you have completed.

The fishing store owner Ezekial Lovecraft mentions his relatives were writers, and about his grandfather Howard. Howard Lovecraft was a famous horror writer.

Retrieved from "https://oldschoolrunescape.fandom.com/wiki/Witchaven?oldid=8690726"
Community content is available under CC-BY-SA unless otherwise noted.