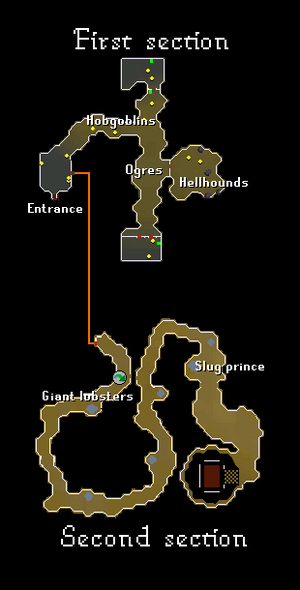 The Witchaven Dungeon is a dangerous dungeon in Witchaven that players with low-medium combat levels should not enter without a very good amount of food.

When you enter the dungeon, you will come into a room containing aggressive level 28 hobgoblins. To the north lies a section which leads into 3 rooms. The north and south rooms contain level 53 ogres. The east room contains eight hellhounds. This section of the dungeon is a key part in the Family Crest quest for obtaining 'perfect' gold ore.

The secret section will be discovered during The Slug Menace. This part of the dungeon is filled with level 45 giant lobsters. Players will also fight a level 62 Slug Prince later in the quest near the end of the hall. There is also an Agility shortcut, which makes passage through the dungeon much quicker. Finally, at the very end of the dungeon is a weird bed-type thing where Mother Mallum probably stayed through her years of imprisonment.

The following quests are involved with the dungeon: