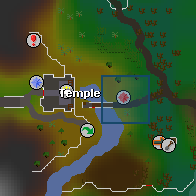 The Woman-at-arms is one of the mercenaries at Paterdomus who needs escorting to Burgh de Rott in Temple Trekking minigame. She is a hard follower, meaning she has the lowest hitpoints and is vulnerable in combat.

Retrieved from "https://oldschoolrunescape.fandom.com/wiki/Woman-at-arms?oldid=8687173"
Community content is available under CC-BY-SA unless otherwise noted.