Start a Wiki
This article is about the location on Fossil Island. For where Skeletal Wyverns reside, see Asgarnian Ice Dungeon.
Loading... 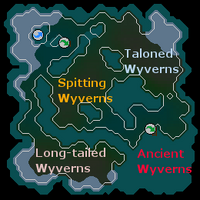 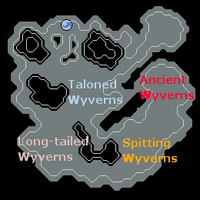 The Wyvern Cave is a set of ancient caverns found on Fossil Island. It contains wyverns that were long thought to be extinct.

There are two different wyvern caves - one where players can freely slay them, and one for those that have been assigned a slayer task of Fossil Island wyverns. The task-only cave is reached via the trapdoor found in the Mushroom Forest, and the regular cave is found south of the Museum Camp. If a player attempts to attack the wyverns in the northern cave without a Fossil Island wyvern slayer assignment, Weve (Steve's son) will stop them from doing so.

From the appearance of both caves, it is clear that dragonkin have previously inhabited the area. In the northern cave, a shrine can be found alongside what appears to be skeletal remains of a dragonkin. Upon examining the shrine, the chatbox will state Forcae castil draekeun. Ortha lokur. Lith kletter ortha lokur. Draekeun fia Lithkren.

Using translations found in RuneScape 3, the examine text can be roughly translated as Forcae combine dragon. First steel. Superior green first steel. Dragon safe from Lithkren. Forcae is the name of the dragonkin who created adamantite and runite dragons, while Lithkren is the name of a fortress built by a dragonkin, whom the author of the ancient diary knew.

In addition, the southern cave contains three stone tables with the dragonkin symbol. Two are destroyed, but one in the north-east corner is fully intact, alongside the remains of what is presumed to be a dragonkin.

Retrieved from "https://oldschoolrunescape.fandom.com/wiki/Wyvern_Cave?oldid=8694379"
Community content is available under CC-BY-SA unless otherwise noted.