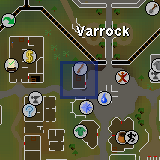 Zaff is a salesman who owns Zaff's Superior Staves in the city of Varrock. He is located in his shop just north-west of Varrock centre. His shop is often visited because it is one of the few places that sells battlestaves, the other being Baba Yaga on Lunar Isle. He is also involved in the What Lies Below quest. During the quest, players can summon him by using a beacon ring and Zaff's instructions.

Zaff is secretly a member of the Varrock Palace Secret Guard (likely accounting for his shop's proximity to it), known to Rat Burgiss, and it appears his proficiency at magic is far higher than many would presume, as it was he who possessed the Beacon and used a spell to counter Surok's mind control spell, disabling Surok's teleportation magic and imprisoning him in the library.

Zaff sells noted battlestaves for 7,000 coins each, in the barrel found in the corner of his shop. Depending on the tier of Varrock Diary completed, players will be able to buy battlestaves from his barrel daily. The battlestaves restock daily at 00:00 GMT.

The battlestaves are claimed to be discounted, however they cost the same as the normal store price. The only possible "discount" is that their price does not increase as stock decreases, saving the player at most a few thousand gold per day.

Partial completion of the quest What Lies Below is required to purchase battlestaves, an update introduced into the game to combat bots.

Retrieved from "https://oldschoolrunescape.fandom.com/wiki/Zaff?oldid=8210351"
Community content is available under CC-BY-SA unless otherwise noted.