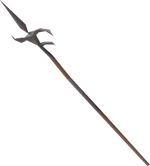 The Zamorakian hasta is made by taking a Zamorakian spear to Otto Godblessed, along with a payment of 300,000 coins. It is the fastest hasta in the game and the second most effective stab weapon behind Ghrazi rapier. Despite the examine text calling it a spear, the Zamorakian hasta does not deal full damage when fighting the Corporeal Beast.

It is a popular weapon against dragons of all types and enemies weak to crush, such as Vet'ion, as it has the second highest stab bonus in the game and a reasonable crush bonus. It also possesses the highest defensive bonuses for a one-handed weapon in stab, slash, and ranged. All of the stat bonuses remain the same as a Zamorakian spear, and it retains its special attack. As the hasta can be wielded with off-hand equipment such as a shield or defender, it is preferable over the spear in all instances except when fighting Corporeal Beast.

To make or wield it, you must have completed the Fishing and Smithing parts of Barbarian Training. The Smithing section requires you to finish the Tai Bwo Wannai Trio quest. Like the Zamorakian spear, the hasta requires an Attack level of 70.

Otto Godblessed can turn the hasta back into a spear for free, should you so desire.

The Zamorakian hasta has a special attack, Shove, which it shares with the dragon and Zamorakian spear. It pushes an opponent back and stuns them for three seconds, consuming 25% of the player's special attack energy.

The effects of this special are non-stackable, meaning that players cannot use the hasta's special attack on a target who is already stunned. In addition to this, players are given a one tick (0.6 seconds) period of immunity after a stun wears off in which they cannot be stunned again.

In addition, it cannot be used against large monsters, such as giants, because they are too big to push back. If a player tries this, a regular attack occurs and no special attack energy is consumed. A message appears in the chat box, reading, "That creature is too large to knock back!" A general way to tell if the hasta can use the "Shove" special attack is to determine how much space the target monster takes up. If it takes up more than one space, it cannot be shoved. For example, a player can shove an ice warrior, which takes up one space, but not an ice giant, which takes up four.