View source
watch 02:52
Roblox: DeepWoken - The Loop
Do you like this video?
Play Sound
RSCRS 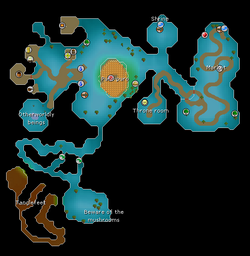 Zanaris, also known as Fairy City, is the home of the fairies. Accessed during the Lost City quest, the settlement is notable for bearing several amenities, such as a marketplace to buy a dragon longsword, or the highly useful fairy ring transportation system.

The entrance to Zanaris is located in the abandoned shack in Lumbridge Swamp. It is the city of the fairies and can only be accessed once the Lost City quest has been completed. The actual location of Zanaris is probably deep underground. [1]

The fairy ring code for the main portal in Zanaris is BKS. Zanaris can also be accessed by wielding a dramen staff or lunar staff and entering the small hut in Lumbridge Swamp to the north-east of the mine. You can also gain access via The Abyss to the Cosmic altar. There is a one-way fairy ring to Al Kharid bank from the market area.

The Lost City quest is a pre-requisite to visiting Zanaris. Both Fairytale Part I and Part II naturally require visits to the land of the fairies.

There is a bank in Zanaris, close to a general store.

The market area lies to the east of Zanaris and costs one cut diamond to get in. Here, you can buy Dragon daggers for 30,000 coins, and Dragon longswords for 100,000 coins. You must have completed the Lost City quest to be able to wield these powerful weapons.

There is also a stall here that sells ruby rings starting from 1012 coins each, which may be enchanted into rings of forging, useful for smiths with a large amount of iron to be smelted.

There is also a fairy who will pay 100 coins for cabbages, and two yew trees for woodcutters.

Finally, the exit from the market is to the north-east of the market area; just enter the fairy ring, and you will find yourself behind Al-Kharid's bank. You can't return back.

The Cosmic Altar lies to the south of Zanaris. There are two Agility shortcuts that allow faster access, requiring 46 Agility for the medium shortcut and 66 Agility for the advanced shortcut. You will take damage if you fail these shortcuts, but not a lot.

Near the wheat field inside the city are several cows that are reasonably close to the bank.

There is also a sandpit, which is used in glassblowing. If you already have soda ash, the furnace to the north may be useful for making molten glass at the same time as collecting sand.

There is a wheat field and a nearby windmill, so flour is easy to make here. There are also several fountains for collection of water, though these are by no means the closest water-sources to a bank in the game. There is also a cooking range to the south of the bank.

Among the cows near the wheat field is a milk cow, and in the windmill, there is a churn. Combine that with the bucket spawn near the windmill and the nearby bank, and all the requirements for making butter, cream and cheese are present.

Chaeldar is the third highest level Slayer master, and requires a minimum combat level of 70 to take tasks from. She gives out a lot of metal dragons, but otherwise, her tasks can be very rewarding.

By using a raw chicken with the shrine of the Evil Chicken near the entrance from Lumbridge Swamp, you gain access to a dungeon with 4 Black dragons and a Baby black dragon as well. Mining rocks are also available.