A magic talisman in the shape of a small zombie monkey head. 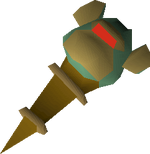 The small zombie monkey greegree allows players to turn into a zombie monkey on Ape Atoll or in Ardougne Zoo. While in this form, a player may walk safely across the bed of hot rocks underneath the temple on the island. To make a Zombie greegree a player must take the bones of a small level 104 monkey zombie (found in the dungeon beneath the Temple of Marimbo) and a Monkey Talisman to Zooknock in the Ape Atoll Dungeon.

The greegree is mainly used in Recipe for Disaster but also can be used to avert being attacked on Ape Atoll.

Retrieved from "https://oldschoolrunescape.fandom.com/wiki/Zombie_monkey_greegree_(small)?oldid=8020464"
Community content is available under CC-BY-SA unless otherwise noted.