The green hooded serpent of the poison waste.

The crimson hooded serpent of the poison waste.

The turqoise hooded serpent of the poison waste.

Zulrah is a level 725 snake boss that was released on 8 January 2015. It is a solo-only boss, meaning players cannot fight this boss in teams. Players can only attack with Ranged or Magic; though Zulrah can be reached with a Halberd, it is immune to melee attacks. Although completion of Regicide is not required to fight Zulrah, players must have completed the quest to the point of reaching Port Tyras (completion of Regicide is required for the teleport). There is also a fairy ring teleport, code BJS, west of Zul-Andra that is unusable without completion of Regicide. In addition, a stepping stone must be crossed to reach Zul-Andra, requiring 76 Agility to use (can be boosted).

Before the player can fight Zulrah, they must speak with High Priestess Zul-Harcinqa first and offer themselves as the sacrifice in place of the gnome child, as Zul-Gwenwynig will prevent the player from boarding the boat until Zul-Harcinqa allows you to be the sacrifice.

Should a player die during their battle with Zulrah, they can retrieve their items by speaking to Priestess Zul-Gwenwynig. However, if you die anywhere unsafe a second time without retrieving your items, all items from your first death will be lost completely.

It is unknown when or how Zulrah arrived at the Poison Waste, but it is known to have adapted to the toxic waste surrounding it and eventually became the only creature able to live in the wastes. Zulrah's gender is ambiguous; the High Priestess Zul-Harcinqa refers to it as a male, while the examine text of Zulrah's boss lair display refers to it as a female.

Sometime during the Fifth Age, Harcinqa's mother, Harcinqa, her daughter, and Rentos, her son, visited the Poison Waste. On 5th Bennath, group of men, Ohn, Mortarium, Onan, and several others, attempted to escape the elven clans by running south to the Poison Waste. With no food to eat, they attempted to fish for eels in the swamp, to no avail. With no luck on catching food, they decide to camp out with the gnomes.

Two days after, Zulrah appeared during the night and ate five of Ohn's men before the group could get to their senses. The next day after that, Harcinqa's mother attracted Zulrah's attention with a giant campfire, and held out her son, Rentos, which it devoured immediately. The gnome woman bargained a deal with Zulrah, promising to send it sacrifices in return for food and worshipping it as a god. Zulrah agreed to the terms, and the next day, began sending eels to the group to eat.

As a result, Zulrah is worshipped as a god and it is sent sacrifices daily, and in return, allows the village of Zul-Andra to stand and sends eels daily to the villagers.

Zulrah is located in a shrine east of Zul-Andra, which is accessed by boarding the sacrificial boat. The area is instanced, and the player goes alone, meaning that Zulrah cannot be killed in teams. Upon entering the shrine, Zulrah will appear. The only way to escape from the shrine is by either teleporting out, or killing/dying to Zulrah.

Players can spectate a fight using a telescope located on an island north of Zul-Andra, which is accessed by using the fairy ring code DLR.

When a player defeats Zulrah, the drops will be received under the player, much like cave krakens. A Zul-andra teleport scroll will also be dropped around the player, which can be used to bring the player back to Zul-Andra.

Zulrah uses venom, a stronger form of poison and starts off at 6 damage. Unlike poison which decreases over time, venom increases by 2 every time it hits. If not cured, the damage will continue to increase, eventually reaching a cap of 20. Venom can be cured instantly by drinking any anti-venom potion, or by two doses of any antipoison potion. One dose of an antipoison will reduce it to regular poison. Wearing a serpentine helm will prevent the player from becoming envenomed.

Zulrah has different attacks depending on the colour it is.

Zulrah changes forms by diving into the swamp and then reappearing somewhere in the arena (either in the middle or just outside the middle area, in a certain order depending on the first spawn after the Ranged-Melee-Magic attacks).

Once Zulrah is defeated, a scroll is dropped on the ground near a players loot - upon reading the scroll, the player is teleported back to Zul-Andra. Players cannot pick up this scroll. To fight Zulrah again after defeating it, a player must leave the shrine and return via the boat.

When fighting Zulrah's green form, it is recommended to activate Protect from Missiles. When fighting Zulrah's blue form, Protect from Magic should be activated. However, there are two other green forms, one that will switch between Magic and Ranged attacks towards the end of each attack pattern, so for this one, you must flick each attack. Be aware in this stage, you may also be attacked by the snakelings and can easily be combo'd out. The other green form can appear if the player takes too long on a pattern, and it will switch between Ranged and Magic attacks randomly like the blue one.

The fight begins with the player in front of Zulrah in its green form. Avoid the toxic fumes that it creates as it fires them around the area. After a short time, it will immediately switch to a different form and begin using abilities and attacks from that form.

During the turquoise form, it can use both toxic fumes and white orbs, which will summon a Snakeling. Although snakelings have 1 Hitpoint, they can hit very hard against the player, so a ring of recoil or a charged ring of suffering is recommended to kill them off if needed. The areas that Zulrah launches white orbs will not have any toxic fumes during that phase, so stand in those areas when needed. When Zulrah is crimson, it will stare at the player before attacking that area. If they are not two spaces away from it, they will take Melee damage and also be stunned, which can leave the player in a dangerous state if their Hitpoints are low and there are nearby fumes. During his light green form, prayer flicking can be helpful, and eat when needed, as both Magic and Ranged attacks will be used against the player.

Zulrah and the snakelings can envenom the player very frequently even through protection prayers. However, the toxic clouds cannot inflict venom, nor can they be protected against. It is recommended to use Anti-venom+ after becoming envenomed to maximise their effectiveness.

It is recommended to use long-ranged attacks to avoid the venom clouds if Zulrah is in the way of them.

Upon death at Zulrah, your items will be held by the priestess whom you talked to at the boat. Some specific anomalies occur with some specific items. This information may be useful to ultimate ironmen.

The following items are destroyed forever and cannot be retrieved

The following items are kept, but not in the state they were lost

The following items are kept, along with their contents

In addition to the 100% drop, the player will also have two rolls on Zulrah's drop table.

There is a 1 in 256 chance of hitting the unique drop table per roll, meaning there's 1 in 128 chance per kill to receive any item from this table, as Zulrah gives two rolls per kill. Below lists the effective drop rates per kill of any specific item, which takes into account the fact that there are 4 different items in this drop table.

In addition to the drops above, this monster has a 1/32 chance to access the standard rare drop table.

Initial design concept of Zulrah, at this point called Damballa 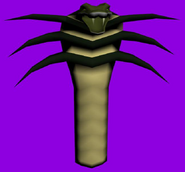